Sophie The Giraffe shows the same qualities as a pacifier. Thus, safe and healthy play is guaranteed when baby explores her by chewing on her.

Sofie also makes noises, she "laughs" (squeaks) when you press her belly. Thanks to her long neck, her long legs and her round head, she is easy to grab and to manipulate. This cute giraffe is 7 inches in height.

The teething toy is hand-made in France and simply a CLASSIC!

All babies shown here are kids of my friends and they all love this cute little animal and enjoy to play with natural rubber Sophie Giraffe! Since baby girls and baby boys alike like the teething toy it makes a great unisex and gender neutral baby gift.

So if you are invited to a baby shower and baby's gender is not known yet, Sophie will be the perfect baby shower present. 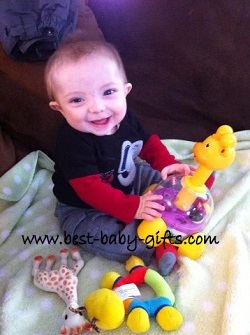 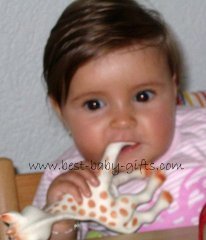 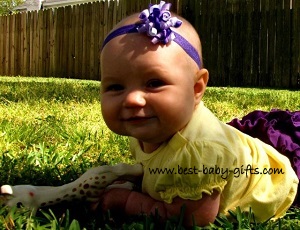 Sophie comes everywhere with me!


History And Features Of Sophie The Giraffe 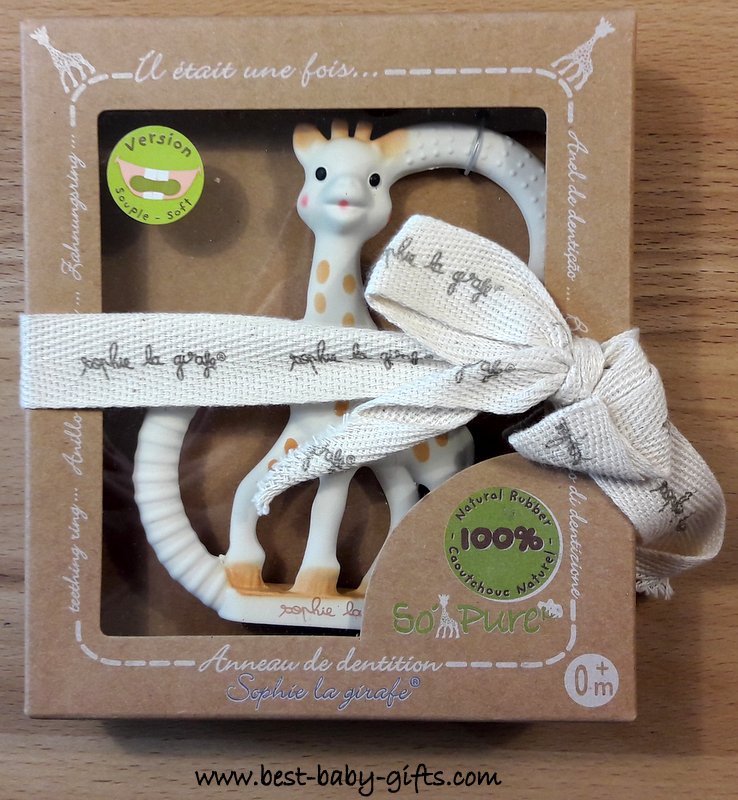 Rubber Sophie giraffe 'was born' in France in 1961, meaning she's actually older than 55 years! Since then she has gradually conquered the world of babies all over the world. Her success is legendary with millions of units sold worldwide.

In her home country France, Sophie is a popular baby gift as these figures show: For example, in 2003, 780.000 babies were born in France of which 550.000 got Sophie The Giraffe as a toy and talisman to play with! Ever since timeless Sophie is still as popular and the product range has been joined by clothing featuring the giraffe, some more 'friends' and various gift sets.

Sophie The Giraffe by Vulli is not just an ordinary teething toy. She also stimulates baby's senses:

- At the age of 3 months, a baby’s eyesight is still limited. Yet, the dark and contrasting spots on Sophie provide visual stimulation and soon she becomes a familiar object for baby.

- The squeaker stimulates babies hearing. Later it helps baby to understand the link between cause and effect.

- Sophie the Giraffe has just about the right size for baby’s hands. It is very light and easy to grip.

Lots and lots of people confirm that this teether is worth every penny. Sophie is sold on amazon, go and have a look at all the raving reviews there - just click on the image below to see them.

Famous Sophie has appeared in numerous US magazines and newspapers as well as in a scene of 'Sex and the City' (Miranda and Steve's baby son has one). Natural rubber Sophie Giraffe has also been featured on Martha Stewart as a baby must-have!
And nowadays many celebrity mums and dads are pictured with their baby and the cute giraffe such as Nicole Richie, Naomi Watts & Alexander Schreiber, Isla Fisher, Kate Hudson, Dennis Quaid, Miranda Kerr & Orlando Bloom, Sandra Bullock, Elton John, Hillary Duff, Kim Kardashian, Nicole Briscoe and many more. Google for "Celebrity Sophie Giraffe" and you will be absolutely amazed how many pictures of celebrity parents with Sofie you will find!

Sophie Just Got A Lot Of New Friends!

Giraffe Sophie also has some adorable friends: first there are Chan, Pie and Gnon - they are also made of 100% natural rubber and food color. Apart from that they have the same properties as Sophie, too. They wake up all of baby's senses. They are safe to chew on, easy to grip and the natural and special smell of the rubber tree plant helps baby find exactly this toy amongst all the others.
Collect all three of them - they have a lively color and are a real eye-catcher for baby!

Just a couple of years ago Vulli added a whole bunch of more funny natural rubber teether friends such as Margot The Turtle and Kiwi The Bird Rattle.

Sophie is so popular and famous that she even has her own baby books now! So join Sophie and her friends for a game of Peekaboo, learn first words, the colors or the ABC or enjoy their colorful touch and feel Playtime Book. Or maybe even all of them :-)

Also look out for  the book gift sets including the giraffe or a giraffe teether.

Because of their versatility, Sophie and her friends are one of the best organic and natural teething toys - if not the best! 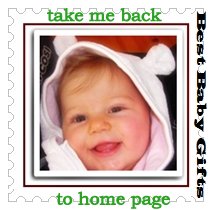 Have your say about what you just read! Leave me a comment in the box below.

Some links on this page marked #ad are affiliate links. This means when you purchase a product through one of these links I earn a small commission. There is no extra cost to you. This money helps me to maintain this website and provide free information for you. Thank you for supporting my website. To learn more please see my affiliate disclosure document.